The Top Locations to Visit in Australia

Australia, referred to as the world’s smallest continent or as its largest island lies between the Pacific and Indian Oceans. There’s ample room to move about in the Land Down Under that brings with it many sights to discover and enjoy.

We have for you, a sample of the top locations in Australia that has something special to offer every visitor.

Adelaide, with a population of over 1.2 million is the capital of South Australia and Australia’s fifth largest city. Most South Australians live in the metropolitan area on the plain between the Gulf St Vincent and rolling Adelaide Hills bordered by the country’s famous vineyards. Much of the inner city’s architecture is retained from the colonial era and justly referred to as the City of Churches.

Alice Springs features boundless desert landscapes, cavernous gorges, remote Aboriginal communities and a charming history. It is a travel hub for sights and hikes in the region, embodying the hardy outback of the Red Centre, alongside other landmarks such as Kata Tjuta (the Olgas), Uluru/Ayers Rock and Kings Canyon. Located in the heart of Australia about 1500 km (900 miles) from the nearest major city, the population is only about 28,000.

Cairns is a provincial but stylish city with a population of around 150,000 people located on the northwest corner of Australia. Cairns earns its fame as one of Australia’s most popular vacation destinations thanks to its easy-going ambiance, tropical climate, and proximity to the Great Barrier Reef. As a coastal destination, it features considerable diversity in wildlife and offers abundant opportunities for travel adventures.

Darwin that hugs the coastline along the Northern Territory is a popular international city of the country’s major cities. Close proximity to other nations in the Indian Ocean turned the city into a preferred port hub since the earliest days. Darwin, a city of around 75000, has a resilient history of arising after being devastated during WW II.

The Great Barrier Reef is the world’s largest barrier reef system encompassing a vast area of more than 2,900 coral reefs and hundreds of islands and cays. Formed by millions of living organisms over millions of years, the Reef is now one of the world’s most diverse ecosystems and one of the top destinations for underwater explorers and scuba divers.

The capital city of the Australian island of Tasmania, Hobart is Australia’s second oldest city after Sydney. With a population of just about 250,000 Hobart is small in stature but intimate compared to the larger. Many fine examples of Georgian and Victorian architecture spot the city. The Salamanca Place has a terrace of warehouses which date back to the whaling days of the early 19th century.

Perth, the capital of Western Australia is located on the southwestern coastline. Isolated from other major cities in Australia, Perth nurtures its own unique character. Despite having been inhabited for thousands of years, a fun-loving attitude and youthful atmosphere set this city of nearly two million people apart. 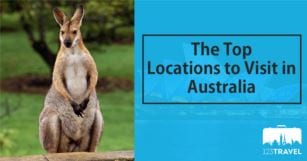