Time to go traveling! Be it Bishkek or Bucharest, our list of the best budget travel destinations for 2017 features some exotic choices from the well traveled in the world. There’s something for everyone here. Some of these destinations have made the cut thanks to the fluctuations of the almighty dollar (Australia is one) while others like Kyrgyzstan are more off-the-beaten track.

Resplendent with several centuries of historic architecture, there is an interesting mix of old and new on display in Bucharest. An ample number of museums, historical sites, and cemeteries to explore, as well as an active nightlife and lots of cheap, hearty food to be found! A must visit spot for digital nomads; it’s a city rapidly on the rise.

Vietnam has long been known as a budget destination, but the region north of Hanoi along the Chinese border often gets overlooked. This is definitely a wrong that has to be rectified, as Northern Vietnam is where the most awesome scenery and interesting cultures can be discovered. Sprawling rice terraces and ethnic minorities all add to the adventure.

It’s recommended to rent a motorbike to witness first-hand the stunning landscape of the towering mountains by the twisting roads and also helps to keep your costs really down. Budget travelers have the option of private accommodation that can be had for around $10-15 a night or even dorms as low as $5. Local transport never costs more than a few dollars between towns and food from $0.50 – $2 a dish.

Lisbon offers a nice variety of historic buildings, museums, eclectic music and nightlife with plenty of squares and cafés to watch the world pass by. You are sure to fall in love with this city with just a visit. It has tons of character with an old, gritty feeling. Much cheaper than most other European destinations, budget accommodation clocks in around $30.

With as much as 90 percent of the country filled with mountains combined with a rich culture and history that goes back several thousands of years, Kyrgyzstan is one of the most underrated tourist destinations in the world. The capital city of Bishkek is an incredible hub to explore Central Asia, with some incredible trekking opportunities in the surrounding mountainside and remnants of the Silk Road like the Burana Tower a mere short drive away.

To top it off, Kyrgyzstan is surprisingly affordable for a budget traveler. Private accommodation can be found in the city for as little as $15 a night and wholesome meals starting around $2. A traditional yurt stay with two meals included can be had for as low as $20 per person.

Despite being an Asian metropolis full of modern skyscrapers, high tech infrastructure, a large expat scene Seoul has its share of historic landmarks too. Not to mention, super delicious Korean food at rock bottom prices. Being a major transit and business hub, it is easy to get to and from this low-cost city. 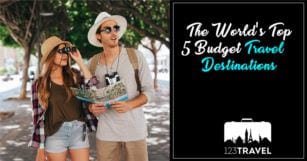