For those planning multi-stop tours around Europe, Switzerland is the most popular destination. Everyone knows that it has the most beautiful views of the Alps and very impressive cities, but there are also a lot of misconceptions. First-timers rarely know where they need to go. You will be able to identify the places of interest only after hours of research or you’ve been there yourself.

The first and foremost (and sometimes only) stop for casual tourists is often its largest city, Zurich. It’s an unfortunate choice since Zurich is not that interesting and is one of the most expensive cities in the world. The other popular destination Geneva is also notoriously dull and lacking distinction. The other main cities of this ilk include Basel, Lausanne, and Bern. No need to visit them unless you have a reason to.

For the best possible Alpine views and activities, head to the Interlaken. For a pure Alpine experience, you need to stay in one of the small villages above and around the city. If you plan on going up the mountain, you need to get off at the East station and the West station if you choose to stay in the city.

Gorgeously set on a lake, Lucerne is the traditional Swiss tourist retreat with interesting culture and sights. The main attraction here is Lake Lucerne and the various small towns on its shores. Lucerne is worth at least a day of exploration.

Several historic wooden bridges of which the covered wooden Chapel Bridge is the most famous, criss-cross the stream. Many traditional shops and high-end boutiques line the small streets just north of the lake. You can’t leave Lucerne without having a look at the famous lion statue.

The remote town of Zermatt in southern Switzerland is famous for the magnificent view of the Matterhorn mountain and apart from a ski resort, not much else. Being on a private rail line, it’s more complicated and expensive to reach.

A perfect options for nature lovers on short visits to the Alps. Both have the most stunning natural mountain settings you’ll ever witness. Of the two, Mürren has much more hotels and tourist shops.

Cable cars ferry tourists to the Schilthorn observation deck and restaurant, one of the highest peaks in Europe from where you can have a 360-degree view of the mountains. Also worthwhile is the James Bond attraction from the 1969 movie “On Her Majesty’s Secret Service”.

The highest railway line and station in Europe, it’s on a privately-run line. The train from Lauterbrunnen takes about two hours to get to the top, including a change of trains halfway in Kleine Sheidegg. Once on top apart from the breathtaking view of the Lauterbrunnen Valley, you can indulge in lunch, hikes or go sledding.

Almost everything in Switzerland doesn’t come cheap, but the quality is so high that it doesn’t feel like a rip-off. And though it might seem expensive at first, the Swiss Travel Pass is a very good deal for most planning to take a tour in the scenic and panoramic trains. Pass holders enjoy discounts on the Schilthorn cable car and the Jungfraujoch mountain railway. 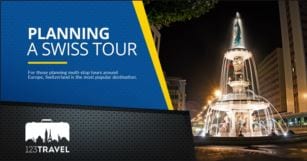