If you’re traveling overseas, chances are you’ll need some money in the local currency as soon as you arrive – for a cab, public transportation or even food. Given the prevalence of ATMs around the world, it is usually as close as the nearest cash machine. If you arrive at a major international destination, your best bet is probably to find an ATM as soon as possible and withdraw some cash in the local currency.

But this may not always be the case. Certain countries have terrible ATM service. Smaller airports, particularly in less developed countries, may not have ATMs at all. And in some instances only a single ATM — and there’s no guarantee that it will be functioning, or that your ATM card will be compatible with it.

So it’s always a good idea to have some local currency on hand even before you leave home. About $100 – $150 in the local currency, depending on the cost of transportation and how soon you can reach an ATM. It is mainly for the convenience factor – as long as you have some currency, you don’t have to worry a lot.

You can either bring U.S. dollars to use at the airport’s exchange bureau or change your money at a bank before you leave home. Your local bank may also be able to get you foreign currency at a few days’ notice.

Purchasing foreign currency from a US bank or exchange bureau is NOT the most cost-effective option; you’ll be charged a commission, and you won’t get the interbank rate as you would with your ATM or credit card.

You are charged a hefty fee by most banks when you make an ATM withdrawal in a foreign country. You’ll lose money even when you exchange currencies at an exchange counter because of commissions and rate spreads.

Two popular companies that sell you small amounts of foreign currency in the United States are Wells Fargo Foreign Exchange and Travelex. Here too, you will not get the interbank rate as you do with your ATM or credit card.

It’s a good idea to keep some small U.S. bills with you when you’re traveling overseas. They come in handy in case you ever need to exchange a small amount of money, and in some countries, you may get better exchange rates. Some places will also accept payments in USD — Don’t always count on this.

You will inevitably end up with some leftover small change when you leave a country. Some travelers then apply all their remaining foreign currency to their last bills, spending the exact balance. Or wildly spend the rest of their remaining cash on their way out, at the train station or airport.

Some like to hold onto foreign coins and notes as souvenirs. One option you should consider is to donate your leftover money to those in need. The UNICEF’s Change for Good program has made it easy to turn your remaining currency into charity and has raised millions of dollars for needy children around the world. 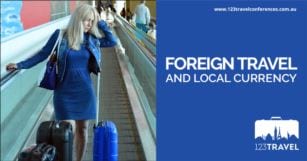