Perth – All Set to Become the World’s Hottest Culinary Destination

Reputed for its endless pristine beaches and all round sunshine, Perth has long established itself as one of the world’s hottest travel destinations. Come 2018, a non-stop flight from London will land in Perth for the first time turning the city into an ideal Australian stopover. With non-stop flights, it is about to become even more of a perfect gateway to the Land Down Under.

But this cannot by itself explain how this Western Australian capital has achieved global cool status in a short time.

In a reflection of Perth’s love for food, the city boasts several excellent in-house restaurants like the Wildflower and Post, under the direction of stellar executive chef Jed Gerrard. Fine dining, at its ultimate.

A culinary scene going into overdrive with a slew of new hotel openings and a spate of hip new bars, a revitalized arts community and major new urban projects such as the Perth City Link and Elizabeth Quay add to the frenzy. With great new eateries popping up at an alarming frequency across the length and breadth of the City, keeping abreast of openings in Perth has turned into a full-time occupation.

The number and quality of recent hotel openings in Perth are pretty remarkable, to say the least, and the city now offers up a number of design-oriented budget accommodation options such as the Alex Hotel, Aloft, and Tribe. Newer noteworthy establishments include the 850-capacity bar and restaurant Ku De Ta inspired by it’s namesake beach bar in Bali and the new Italian trattoria Lulu La Delizia in Subiaco that serves up hand-made pasta.

Deservedly well known for its beaches, Perth has 19 of them within easy reach of the city. And now, the Scarborough Beach is set to become one of the best beachfronts in Australia after a redevelopment, and the City Beach has added an amphitheater to its range of waterfront dining options.

The eclectic port city of Fremantle, a mere half hour away from Perth has also gone through a similar transformation. The refurbished oceanfront eatery Coast Port Beach and the Sweetwater Rooftop Bar are part of Fremantle’s new Richmond Quarter. One can combine visits to these alongside tram rides or Segway tours through the historic streets, visits to the WA Maritime Museum and Fremantle Arts Centre, pottering around in the Fremantle Markets and a swim/tanning session at the exquisite Bather’s Beach.

A ferry ride away from the city is Rottnest Island – with its 63 white-sand beaches, an A-class nature reserve perfect for snorkeling, diving, and surfing. Adding an extra sparkle to Perth’s island playground is the new marina and an upmarket glamping experience slated to open later this year.

The well-deserved reputation of Perth’s bar culture ensures that no one is likely to go thirsty in the West Australian capital. The birthplace of a large number of reputed Australian craft beer such as Matilda Bay and Little Creatures Perth continues this tradition with several new openings such as the Mash Brewery, Northbridge Brewing Company, and Feral Brewing Co – combined with a new-found obsession for artisan gin, vodka, and whiskey. 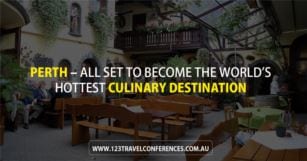