According to experts, 50 million people are expected to travel at least 50 miles between November 23 – 27 to visit loved ones over the Thanksgiving holiday weekend. No wonder since this is the most traveled holiday of the year.

The heavy rush during holidays may be inevitable, as is feeling fraught. But it need not be so. Of course, there are more wheels on the road, longer queues at the airports and inevitable flight delays and cancellations due to harsh wintertime weather. But traveling during the holiday season need not be an experience devoid of joy, according to those in the industry.

Here are a few tips on how to minimize the stress of traveling for the holidays.

Make your trips on Holidays themselves.

Traveling on Thanksgiving, Christmas and New Year’s Eve is very much less stressful than going before or after the holidays. There are fewer crowds, and less traffic on the roads as well as lower airfares, According to industry data, travelers can save more than 10 percent on flights if they fly on Thanksgiving Day versus the day before and around 15 percent if they fly on Christmas Day, when compared with immediately preceding dates. That way you can save money and won’t be nearly as much rushed because traveling on holidays isn’t popular.

Plan your trips for later

If you have the option to do so, consider having your vacation in January instead of traveling during year end. Crowds are lighter; travel is generally relaxed and prices are significantly lower. Industry data shows that airfare to many popular domestic and international destinations is cheaper in January when compared with the preceding three-month period. For eg., the median round-trip airfare from cities in the US and Canada to Cancún was almost 20% lower during the January of 2016.

Weeks between Thanksgiving and the New Year are the busiest days for travel in the year, and with that comes more overbooked flights, chances of lost luggage and other similar disruptions. Connection flights, even when they save you money, can result in increased stress because of the increased odds of something going wrong. Rogue weather in stopover stations can delay your flights, and you may eventually end up missing festivities with your near and dear. The money saved alone isn’t worth it.

Opt for delivery of gifts

Even if you’re traveling there, sending presents in advance to your destination has several advantages. You can avoid potential excess baggage charges or overweight fees also minimize the likelihood of the presents getting lost mid route. Or heaven forbid, being ripped open by T.S.A. employees, which they definitely have the right to do if they have a question regarding its contents. Once you see T.S.A. ripping open beautifully wrapped gifts, it’s really not a fun way to start off a holiday.

And as always, plan ahead, expect delays and stay safe.

Related Post: What To Do On A Romantic Holiday In Maldives 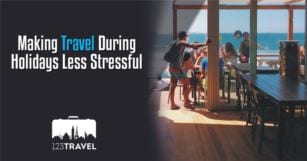