The Tourism Authority of Thailand had a plan for tourists to experience off-the-beaten-path activities and destinations on a 10-day trip through Bangkok and Trat province. The engaging and enlightening itinerary consists of chaotic city life in the beginning leading to a peaceful and tranquil island toward the end.

The trip starts off with a massage lesson alongside serious students from around the world. The two-hour Thai massage treatments at the Let’s Relax spa in Bangkok’s tony Thong Lor district are capped with soothing tea and plates of mango slices and sticky rice. Followed by a serene half-day tour of the Thai capital’s Chinatown.

Lacking the usual pagoda-lined tourist traps, the sprawling Chinatown is a real neighborhood, with numerous auto parts and hardware vendors lining its alleys as well as restaurants and bakeries reveling in their Chinese culinary heritage. The tour begins at the Yaowarat Chinatown Heritage Center, where you get a primer on the country’s history of Chinese influence and immigration topped off with dinner at a Cantonese Talat Noi restaurant.

The highlight of the evening tour is Thipsamai, where throngs wait along Maha Chai Road to sample the pad thai made famous by Anthony Bourdain on his show “No Reservations.” You also see a somewhat different side of Bangkok’s Wat Pho temple complex. After the food tour, you get to see it at night, when the stupas are lighted to show off their intricate exteriors.

Of course, during the day Wat Pho is resplendent with its myriad gold-plated Buddhas and art-lined interiors. The medicine hall, with drawings depicting pressure points and other particulars of the human anatomy, offered lots of insights on Thai massage. Wat Pho is said to be the birthplace of the discipline.

After a couple of days in Bangkok, you take a one-hour flight to Trat. The first stop is the fishing village of Ban Nam Chiao, which embodies a sort of confluence of Thai, Chinese and Muslim cultures — or as promotional literature puts it – the “harmony of heritage variety.”

You learn to make a local delicate specialty, tostada-like rice crackers, said to have roots in the Muslim community. On the other hand, lunch includes a variety of seafood dishes displaying Thailand’s well-earned reputation for spice (proving tear-inducingly hot for even the local Thai guides).

You can cruise on speedboats among the province’s islands to spend some lounge time on its beaches. Considerably less “touristy” by westerners than those in Phuket, but not under the radar either. Sunburned groups throng the main walkway on Koh Chang keeping the massage parlors, souvenir shops and bars full, while the myriad boats shuttling among the various Trat islands keep the designated snorkeling sites full.

On the fishing village of Ban Salak Kok on the island of Koh Chang, you can view the locals prepare planters (made of plastic pipes, wire, and concrete) that replenish the area’s coral, damaged in decades past but on the rebound thanks to such restoration efforts.

It seems that Thailand does have a lot of lessons left for us to learn. 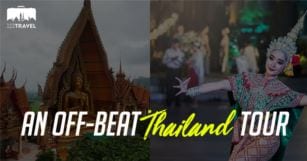