3 Places the U.S. Govt Doesn’t Want Anyone To Visit

The U.S. State Department has issued a travel alert covering all of Europe for the period of May 1 to September 1, 2017. The alert is meant to warn Americans traveling to the continent of potential terrorist attacks that can occur with no warning. Several European countries are popular destinations for American tourists, and what effect the travel alert will have on tourism over this summer remains to be seen.

U.S. currently has standing travel warnings for dozens of countries, other than Europe. In addition, the State Department also issues much stronger warnings. In fact, the U.S. government does not want you to visit as much as 41 countries across the world!

Travel alerts are typically short-term and meant to inform travelers of events in the region that could affect their safety. The more severe travel warnings are issued when the government wants travelers to consider very carefully whether to visit that country at all.

Travel warnings can also vary in severity based on a variety of reasons. Many countries from the Middle East and Africa are on this due to the threat of terrorism and dangers of social and political instability. A few such countries include Egypt, Yemen, Syria and the Democratic Republic of the Congo.

Mexico and Colombia both have standing travel warnings thanks to widespread drug trafficking violence and kidnappings for ransom. Still, there are parts of these countries which are quite safe, and millions of Americans visit these countries every year.

These are the top 3 countries the U.S. government doesn’t want you to visit.

As with some other nations in the region, terrorist threats are the primary worry for Americans traveling in Afghanistan. Extremist groups like the ISIS and Taliban, are present throughout the country. Western coalition forces have been waging war in Afghanistan since 2001 against al-Qaida and Taliban forces. Traveling to any part of the country can be fraught with risk. Travelers run the risk of improvised explosive devices, gunfire(direct and indirect) or risk kidnapping and taken hostages.

Even with a typically heavy police presence in the major urban centers of Algeria, cities across the nation are highly vulnerable to terrorist threats. Organizations with links to ISIS and al-Qaida operate within the country. Terrorist bombings and kidnappings regularly occur near the country’s eastern and southern borders.

In the aftermath of the deadly terrorist attack in July 2016 at a restaurant frequented by foreigners, the U.S. State Department intensified its travel warning for travel in Bangladesh. With the continued terror threat in the country, even U.S. government officials are prohibited from traveling in open air vehicles, visiting public places and attending large gatherings.

The dangers of traveling in these countries is certainly not limited only to Americans or even just to travelers. Often, the conditions that make travel dangerous also make daily lives of the local population challenging and dangerous. 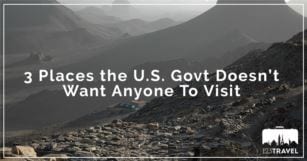