We give you some of the most incredible places to discover Down Under. Some of the mind-blowing sights that drew 8.3 million international visitors to Australia last year. A few destinations that even many Australians, are likely to have missed out on.

Margaret River Western Australia is a mere three-hour drive south of Perth. If a tour of wineries and breweries in between beach sessions sounds like an ideal pastime, it’s the place to be. We recommended visiting tastings at Leeuwin Estate, Vasse Felix, and Cape Mentelle Vineyards. Famous for producing some of Australia’s finest wines, the region is also the perfect spot for an active holiday. The 135 kilometer Cape To Cape Track stretches along Western Australia’s rugged, beautiful coastline and any of the 75 surf breaks is perfect for catching a wave.

The South Coast of Sydney on the border of Victoria boasts one picturesque beach after another with impossibly white sands of Hyams in Jervis Bay. The Coledale Beach will lull you into thinking of being on the French Riviera, not the Australian east coast. The best way to experience this slice of paradise is on wheels, stopping and exploring any spot that catches your fancy.

Uluru the great red monolith in Australia’s Northern Territory has a circumference of 10 kilometers and is 348 meters high. It is impossible to imagine its size until you’ve seen it with your own eyes. You can learn about the traditional Anangu culture at this spiritual center of the country and gain a deeper understanding of Australia’s indigenous roots. At dawn and dusk, the sky turns incredible shades of red, pink, orange and purple. So make plans to visit Uluru accordingly.

Whitsunday Islands a cluster of islands off the coast of Queensland between Townsville and Brisbane has got to be the closest thing on Earth to heaven. With the blindingly white sand and exotic species of fish shimmering in the shallow blue waters. You can dive or snorkel around the Great Barrier Reef, amidst the pristine sand and sea. You can also take a scenic helicopter or seaplane ride to glimpse the Heart Reef, the heart-shaped coral formation which can only be seen from the air.

Byron Bay is just an hour south of the Gold Coast, and the hippie-chic hideout couldn’t feel any more different from Queensland’s state capital. Byron brings you the best of Australia: a laidback atmosphere and a picturesque setting topped by a sophisticated food and drink scene. Resplendent with a cool crowd looking to escape the urban cities – the Hemsworth brothers and their family can be found in Byron when not in Hollywood. A walk up the trail to the Cape Byron Lighthouse, exploring the beaches such as Tallows Beach and Wategos Beach, getting massages, shopping for a colorful dress or knickknacks at the local markets – that’s the Byron way of life.

Be it the natural beauty of Tasmania and the outback or the cosmopolitan cities or pristine beaches and world-class wine growing regions, there’s an Aussie adventure for any kind of traveler. 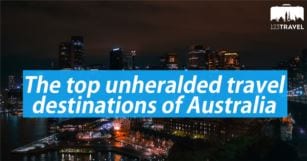