Right from the days of the sacred legends of the aboriginal dreams when their magnanimous spirits explored the rainforests, scorching red deserts, the coral reefs, Australia remained as the land of dreams until the present day, inhabited by some of the quirkiest wildlife on earth.  It’s a land of spectacular beauty and staggered contrast, bring the ultimate in adventure travel on this planet.

Here are some of the most important and remarkable 12 places that one must visit while travelling through this continent, which is as culturally diverse and large as the map of USA.

Located at Bennelong Point, Sydney this breathtaking building grace the UNSECO World Heritage Sites. It is one of the world’s greatest architectural icon with the Royal Botanical Garden bordering it on the south. Built by the famous Danish architect Jørn Utzon, the best site for photographing Opera House is aboard a harbor cruise or from the Mrs Macquarie’s Chair in the Royal Botanic Gardens on its southern side.

Consisting of more than 600 continental islands, 3,000 coral reefs, 300 coral cays and inshore mangrove islands the Great Barrier Reef which is visible even from outer space is one of the seven natural wonders of the world. Stretched around 2,300 km on Australia’s East Coast along the state of Queensland, snorkeling and diving are spectacular in this water world. With an array of 1,600 marine life forms this is a one of the hottest spots for all tourists visiting Australia.

A World Heritage Area managed by the local Anangu people and Parks Australia, Uluru-Kata Tjuta National Park is one of the most photographed places in this continent. Deep in the heart of the Australia’s Red Centre, this national park is where people come to visit the striking red monolith forms, which rises to a height of 348 meters, and are known as Kata Tjuta by the aborigines who still lives in this land.

Raising 134 meters above the harbor, this bridge is also locally called as the “Coathanger”. Built in 1932, Sydney Harbor Bridge connects Sydney’s north shore with the central business district. To enjoy a spectacular view of the Sydney Harbor and the city enjoy visiting this bridge which spans 500 meters with two railway lines and eight lane roadway.

A UNESCO World Heritage Site, the Blue Mountains National Park lies 81 km west of Sydney. A popular day trip from the city this is a 664,000 acres of bush land which has a 140 km hiking trails and is famous for mountain biking, abseiling, horseback riding and rock climbing in Australia.

The second largest city in Australia, Melbourne is a green city with parks, gardens and open space covering almost a third of its total area. Located beside the Yarra River, and in the south to the Mornington Peninsula, Melbourne is famous for its Melbourne Cricket Ground, sprawling shopping malls and the Queen Victoria Market.

Who has not watched the famous Australian reality TV show called “Bondi Rescue”. Located 15 minutes by car from the Sydney city center, this beach is home to the oldest surf life-saving clubs in the world. A great spot to picnic or just for taking a seaside stroll, Bondi Beach is one of the most famous beaches not only in Australia Travels, but it’s also a hotspot on Christmas and New Year’s Eve.

Located in Far North Queensland, Daintree National Park is a wet, tropical World Heritage Zone. The Eastern Kuku Yalanji aboriginal people hold a lot of spiritual significance for this place which homes an astounding biodiversity of more than 18,000 plant species and also the land of secretive Bennett’s tree kangaroos and the giant blue Ulysses butterflies. The resort town of Port Douglas is located just south of this national park.

The largest sand island in the world, Fraser Island is most popular among tourists, for its most unique and adventurous four-wheel beach side drive. Located between Bundaberg and Brisbane off Australia’s east coast, this Australian island is famous for its fresh water creeks, springs and lakes which abounds this land.

Covering more than 19,840 sq. km, Kakadu National Park, which is located in the Top End or in the Northern Territories in Australia, is a World Heritage Site. It is the second largest national park in the world with rainforests, ancient rock paintings, waterfalls, wetlands, mangrove swamps and 300 species of birds and reptiles. Visitors often spot saltwater crocodiles prowling this largest wetland national park in Australia. However, many roads in this park remain closed during the months of Nov-April, because of heavy flooding torrential rains.

The Great Ocean Road is one of the most spectacular 300 km roadway located on the southeast coast from the surfing town of Torquay to the town of Allansford, near Warrnambool in the state of Victoria. An area covered with lush green fern-filled rainforest, dense eucalyptus forest, waterfalls and hiking trails, it’s a must visit for any tourists visiting Australia.

12.   Broome and the Kimberley region

Located in the south of the spectacular Kimberley region, Broome is a booming tourist town in Australia. Once famous as the pearl capital of the world, now it is a place where tourists enjoy camel rides watching the setting sun. The Staircase to the Moon is a rare natural phenomenon, one can see over here during the months between March and October which creates an optical illusion of steps leading over the sea to the moon. The Broom Crocodile Park and the Broome Historical Museum are the other two major tourist attractions in this locality. 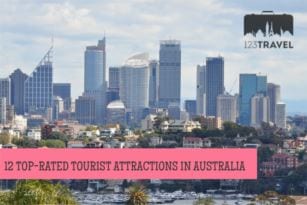 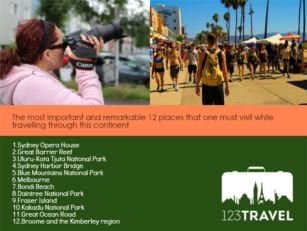