When you’re about to head off on your first overseas trip can be an amazing feeling. But it can also feel daunting and overwhelming. What will you chance on outside your borders? How will you be able to cope with what the wide world has in store for you?  How much money will you need ?

It’s inevitable for anyone to make mistakes the first time they travel, just the same as in any other walk of life. However, these are the more common ones that rookie travelers fall victim to.

Too much of a good thing

Group tours are popular, with titles like “seven countries in 12 days” and such making you feel that’s a good thing. Obviously it’s a big overseas trip and you would want to experience as much as possible – tick as many boxes as you can. But that’s a common mistake to fall prey to. Instead of going everywhere and trying to see everything at one go, it’s better to slow down, get to know a place in detail, and whet your appetite for future adventures.

A sleeping bag won’t be of much use unless you’re actually camping outdoors. Most establishments won’t even allow you to use them. Packing too many clothes,  taking along a huge first aid kit, more than two pairs of jeans or three pairs of shoes are all unnecessary. You really will need only a few necessities and you can use the spare space to horde stuff that you’ll buy while you travel.

Almost everything will cost more than you think it will. From bargain rate flights to the beers you’ll buy during happy hours in a foreign city, everything will be more expensive. You’re sure to spend much more than you’d planned for. It’s advisable to save up as much money as you can before you embark on your travels.

Plenty of people just mistrust everyone in a foreign place. One can always identify the first-timers, those whose eyes are darting about, hands unconsciously guarding their luggage, always on the lookout for scams. When you first start out, it’s hard to spot the crooks from the friendly, so that’s all wasted effort. Rest assured that the vast majority of locals aren’t out to get you, it’ll do well to trust them every once a while – you’ll end up making a lot more friends.

However, there are genuine scammers out there, and more often than not it’s the rookie travellers that provide to be their easiest prey. It’s best to admit there’s no easy way around this – you’re obviously dealing with pros who’re doing this for a long time. Just be cautious, roll with the punches and try not to part with too much money.

A guidebook is a great thing to have, something to point out the right direction and give you basic info on the places you’re visiting. The mistake however, is to only do things listed in the guidebook – things that get the guide book’s stamp of approval. There’s more to the world than the bits listed on the pages or on a website. 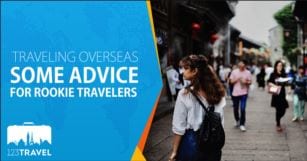