Australia is not just about lazing on serene beaches, surfing exceptional waves, and tasting of world-class wine. We went road tripping around this vast continent country for a year and a half but only scratched the surface. We have come up with what we consider to be the best of what Australia Travels has to offer.

1. The Great Beach Drive from Fraser Island to Noosa :

The Great Sandy Beach Drive from Noosa to Fraser Island in Queensland is Probably the most breathtaking coastline to drive around the globe. The Double Island Point is a good place to take a break and hike up to the lighthouse for some spectacular view. Whales and dolphins are often found in this area.

Inskip Point is a safe place to camp for a night. You can ride a horse along the shoreline if you desire to do so. From Inskip Point, you can get a barge to Fraser.

Spectacular beach driving, whales rupturing from the shore, dingos coming up to say hello (be careful of them) beachfront camping, and the magnificent champagne pools are all just some things you can do here.

It doesn’t end there.

To get the birds eye view of the towering rainforest and inland lakes, hop onto a small plane. Then explore the only place where tall rainforests grow on sand dunes at an elevation of over 200 meters in 4WD vehicles.

The Horizontal Falls are a natural wonder situated in one of the most remote and untouched parts of Australia, The Kimberley district of Western Australia.

A tight opening between two escarpments has created the Horizontal Falls – and there are two of them! This region has been experiencing one the biggest shift in tides around the world, which reach up to 12 meters in difference.

As and when the tides shift from low to high (and the other way around) they send massive amounts of water from one bay to another. The build-up of water shapes a drop of up to four meters, which results in a horizontal waterfall.

The tides in this area are one of the biggest in the world as they can reach a difference of up to 12 meters.

The only way to look at this natural wonder is by flying over it with either a sea plane or a helicopter.

Rottnest is a short barge ride from Perth in Western Australia.

You are greeted with a laidback atmosphere with just bicycles when you reach this island. You can explore some extraordinary beaches on this island with bicycles. There is nothing that beats the simple ingenuity of a bicycle.

Bikes are available for hire on this island. Hire your bike and head out to explore this wild island. The ride around the island is around 22km. For those needing a shorter course, take the 10km as we did. This track takes you through a the most scenic part of the island.

There are a lot of reefs, and you can snorkel at many spots on the island’s shorelines. Parakeet and Salmon are one of the best snorkeling spots here on this island. 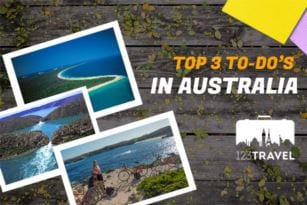 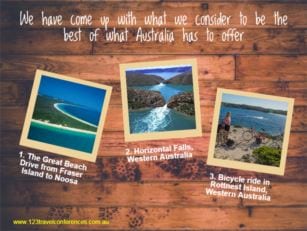