The 4 Best Underrated Travel Destinations in the US

When most of us think of places to travel, it’s obviously faraway places and exotic destinations in Europe, Asia, or Africa. It’s uncommon for people to think about traveling within their own country. So for those travelers in the U.S, here’s a list of 4 must-see places to travel within their homeland.

You don’t have to take our word for it; it’s from the folks at Lonely Planet.

Located in the southeast corner of the Appalachians, it’s a bridge between tradition and modernity. The River Arts District is quickly emerging as a haven for creative spirits, and a home to artists looking to showcase their art. The Blue Ridge Mountains and the French Broad River are just waiting to be explored, sure to lure you away from civilization.

Also, you have ample varieties of locally produced craft beers and spirits to try out with cuisine served up by the city’s numerous James Beard-nominated chefs.

An underrated travel destination for long, it is set to make a comeback as one of the largest cosmopolitan cities in the South. Atlanta is home to the busiest airport in the world, befitting a city on the move. The local vibrant art scene provides a world-class experience, be it the sprawling Living Walls project or the Tiny Doors installations.

Prominently featured in the classic film, “Gone With The Wind,” Atlanta is making a comeback. Hit shows such as its name sake and The Walking Dead are filmed here, earning the city a new nickname: Hollywood of the South.

Who knew that great American wine regions could be found in Texas? When it comes to wine, Texas may not be the first place you think of, but the Lone Star State is home to some of the best varietals in America. All thanks to its rich oil that makes it a conducive place for vineyards.

Not only has Texas made it to the coveted Lonely Planet’s list, but it’s also number 8 according to USA Today. So if you haven’t been to Texas, then perhaps it’s high time that you paid a visit.

Be sure to drive down the Wine Road 290 to sample a remarkable range of Cabernets and Malbecs in comfy state-of-the-art tasting rooms. Also, don’t miss out on the year’s biggest events combine filled with rockabilly beats – notably the Kerrville Folk Festival and the Dripping Springs’ Wine and Food Celebration.

A must for fans of Twin Peaks, the surreal TV drama – the beautiful landscapes of Western Washington alone make it one of the most underrated tourist destinations. Evergreen forests and beautiful misty mountains, micro-distilleries, farm-to-table restaurants as well as newer cultural trends that include pot shops and craft cider.

Especially of note for David Lynch fans will be the filming locations in the small towns of Snoqualmie and North Bend, just in time for the revival.

For those from other countries jaded by traveling to America, look no further. These are some of the best underrated and off-the-radar spots in the country based on the opinions of hundreds of writers and experts. 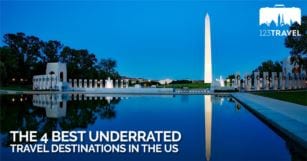