Kangaroo Island is all about the beauty of nature and the simplicity of life on one of Australia’s largest islands. A noteworthy wildlife destination, where Australia’s marsupials have flourished in the wild owing to the absence of foxes and rabbits. KI is called ‘Australia’s Galapagos’ due to this large population of Australian animals.

From east to west KI is 155km long and 55km at its widest. This vast size is host to diverse landscapes – towering cliffs, sandy estuaries, thick native forests and low-lying wetlands surrounded by 450km of coastline and the wild Southern Ocean. You’ll need four days at the least to savour even a part of this amazing natural wonder.

Tourism along with grain and livestock farming plays a significant part in the life of the island. That’s in addition to the ever-present fishing operations (lobster, oysters, and green-lipped abalone).

There is no shortage of wildlife: the KI Kangaroo (an endemic sub-species), Tammar wallabies, koalas, sand goannas and echidnas all be seen with some regularity. They’re sustained by vast tracts of the national park which cover a full third of the island.

The magnificent Flinders Chase which protects 330 square kilometers of forest, creeks and coast. Two of the island’s most striking sights, Remarkable Rocks, and Admiral’s Arch are a spectacular walking experience on the KI Wilderness Trail. The five-day walk takes in gorges, lagoons, cliffs, rivers, beaches, bays and the historic lighthouse Cape du Couedic.

The Seal Bay, is a stunning rocky cove that’s home to a major breeding colony of Australian sea lions. You can view the basking animals from a timber boardwalk that descends through dunes onto the beach. For those who want to get closer, park rangers lead regular walking tours among the animals on white sands. The close-by Little Sahara is a series of stupendous dunes so large that you can happily sand surf on them for hours.

Several other trekking attractions offer uninterrupted wilderness and dedicated overnight camping areas. If you’re in KI between May to October, you can witness the majestic southern right whales and humpbacks. For the time constrained, native animals at Paul’s Place Wildlife Sanctuary and Raptor Domain is home to rescued birds of prey put on daily shows.

Nature enthusiasts can have their fill clicking the Glossy Black Cockatoo, the endemic grass trees found in the rugged northwest, the prickly Kangaroo Island cone stick as well as 60 different species of orchid.

KI has several fantastic beaches that offer plenty of Solace and more than enough of life’s little luxuries. Legendary beaches of Vivonne Bay and Stokes Bay offer soft sands and sparkling waters with hinterlands full of pasture and bush.

KI has some of the finest local produce in the world, fruit of both land and sea. Specialties include marron (sweet freshwater crayfish), prized Ligurian honey from bees found nowhere else and sheep’s cheeses, halloumi and kefalotiri. The island’s many farm gates and cellar doors offer free tastings, and people end up taking loads of local produce back home. 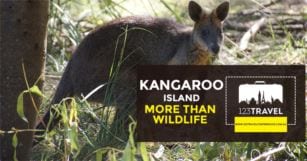