Exotic ‘Food on Wheels’ in Adelaide

Need to grab a bite on the go? Catch one of Adelaide’s top food trucks if you can. Not just Burgers, Taco’s or Hot Dogs you have the chance to have an exotic meal from around the world.

Italian, South American, Mediterranean, or Eastern European, you’ll get to savor these exotic dishes, not in some fancy overpriced restaurant – but out on the streets!

The hard to miss bright red and yellow colors of the Chimichurri Grill truck make it stand out. And once you try them out, the best steak sandwiches this side of Buenos Aires will make you seek them out again and again.

Greg Tillman and his wife, Sarah took out the Chimichurri Grill on the road four years ago. Together they create sumptuous Argentinean sandwiches. The Argentinean version of the sausage sandwich ‘choripan’ is the ultimate street in food. There’s choice of chicken, and vegetarian fillings.

Fancy a meatball or three? The brainchild of David Porcaro, who prepares meatballs just like at his Italian granny did. The big favorite is the butter chicken meatball smothered in an Indian butter sauce and served with rice. Pappadams and coriander act as a garnish.

Still, the only meatball food truck in Adelaide, they have been operating for the past two years. Now, Delectaballs is slowly expanding into supermarkets.

Hungarian Csaba Egri and his wife Monika had a vision of using only traditional Hungarian recipes for their food truck business.

Now, three years later, their specialties include the ‘kurtosh kalach’, or chimney cake, that is made using a 300-year-old recipe. Another hot favorite is Langallo, which is like pizza but with much thicker dough. They also dish out a range of artisan biscuits and homemade drinks, including iced elderflower cordial and raspberry cordial with real fruit.

Gustavo Eraso was born in Columbia and his specialty Andean style chorizo patties zing with that regional flavour. He is changing a lot of people’s perception of South American food.

The Chorizo patties are made from free-range South Australian pork and grilled with melted cheese. Served inside soft bread rolls with lettuce, fresh coriander, smoked salsa sauce and mayonnaise.

Chefchaoen in Morocco is where Moorish Bites’ owner, Mohamed Ben Said, is originally from. Exactly on the opposite side of the world of Adelaide.

His customers love the Meloui, a Moroccan pancake filled with spinach and feta cheese, eggplant, chicken, lamb, or marinated fish. Another foodie favourite is the Moroccan BBQ, followed by pastilla – a filo-pastry pie made from chicken, almonds and spices.

Manuel Parez, a chef in a vegetarian restaurant had an urge to venture out on his own. But there was not enough money to set up a café or restaurant. Neither did he have a food vending truck. So he imported a three-wheeler ‘cargo bike’ from India, and turned it into a moving barbecue. Three years later a second triped with a box on the back makes the rounds with salad and burger making preparations.

Manuel mainly sells three types of vegetarian and vegan burgers. The most popular is the ‘haloumi’ mushroom burger. There’s a choice of lentil and tofu as well.

Related Post: How To Overcome The Fear Of Travelling 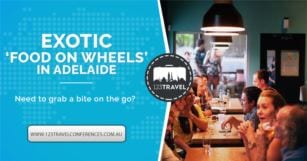