5 Must Visit Destinations in South America

South America, with its vast swathes of impenetrable jungles, towering peaks and ancient civilizations is a destination made in heaven for any adventure traveler. The Latin-American continent has everything exotic you will ever come across: colonial towns, vibrant cities, impressive lakes, smoky volcanoes, long-held traditions and above all, the friendliest people on earth. When you travel to South America, you get to experience firsthand the hospitality and kindness of its inhabitants and realize that it’s not a myth, but a reality.

We have come up with a list of South American destinations that you can’t miss out on while visiting this wonderful land.

At over 10,000 square kilometers, Salar de Uyuni is the world’s largest salt flat. It’s impossible not to be impressed by the endless white expanse and surreal scenery. You might feel as if you have landed on another planet abundant with colored lagoons, smoky volcanoes, and sprawling deserts. Also a great location for watching wildlife like llamas and pink flamingos that soar over the lakes.

The Isla del Sol Bolivia or the Island of the Sun located in the remarkable Lago Titicaca is also a visit worth the experience.

Rio de Janeiro is a place that really touches your heart. Most like it because of its nice beaches and crazy parties. You also get the chance to enjoy a fascinating mix of African-European culture and world-class nightlife. Boasting the world’s largest urban forest, containing magnificent mountain peaks and dozens of trails. It’s highly recommended to hike up the mountains and to enjoy the city-scape from above.

Home to some of the best coffee in the world, the prominent getaways are Filandia, Pijao and Salento – lovely colonial towns where it looks like time has stood still. The lush, green mountainside offers a wide range of adventure activities like hiking, kayaking, canopying, horseback riding and more. A definite highlight is a hike around Valle del Cocora.

Built in the 15th century and later abandoned, the sacred city of Machu Picchu is probably the most famous archaeological site in South America. The ancient Incan citadel is famous worldwide for its huge stone ruins and mysterious history. It’s recommended to visit Machu Picchu early in the morning to catch the sun rising over the green peaks.

To reach there, you first need to stop at Cusco, a colonial city that has spectacular Spanish architecture blending with indigenous culture.

Known as Kerepakupai (the deepest fall) or Salto Angel of the Pemón tribe, it is one of the most breathtaking places you will ever see in your life. Located in the Canaima National Park, it is the highest uninterrupted waterfall in the world at 979 meters.

To get there, you’ll have to fly by air to Canaima as there are no accessible roads. Watching the land from above can be a mind-blowing experience in itself!

Related Post: 4 Day Trips From Brisbane You Need To Indulge In 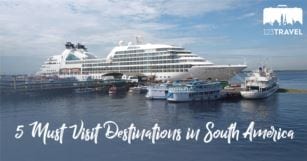