The Wonders of Eyre

The Eyre Peninsula with its craggy ranges, wild seas, and huge sharks is pure adventure country. Australia offers a multitude of adventure experiences, and this is unquestionably one of them.

The west coast of Eyre faces the Great Australian Bight and its wild seas. It’s rocky, rugged, with beaches at the feet of soaring red cliffs. Several such secluded bays like Coffin Bay, Streaky Bay, and Venus Bay host eponymous hamlets with plenty of tourist distractions.

The biggest settlement – Port Lincoln, is spread on steep hills beside the Boston Bay. It’s home to ‘tuna barons’ and aqua-culturalists who’ve amassed millions over the past two decades.

For tourists, there’s a slew of museums, Australia’s largest commercial fishing fleet and a shoreline with pine-trees and cafes. Adventure Charters help families immerse themselves in a number of action-packed marine adventures (shark diving!), as also calmer Marina Cruises.

The Neptune Islands is where Steven Spielberg shot his live-action footage for Jaws. Nowadays, GoPro-wielding visitors partake in shark diving with Lincoln-based operators to get up and close to some of the world’s largest Great White Sharks.

A grand vista of sparkling waters fringed by white sands and serene pastures – the drive to Baird Bay is worth it for the views alone. The bay is well protected, where you meet the resident bottle-nosed dolphins in still, clear waters. The bay is also home to a colony of sea lions. These inquisitive animals will come to check you out, and the little ones love to play.

Once you’re tired of the coast, there’s nothing quite like the outback to make you reassess your place in the world. The Gawler Ranges consist of 1.5 billion-year-old ranges, sprawling pastures and wide-open salt lake country.

One of the Gawler Ranges Wilderness Safaris will take you through the gorge country, inland dunes, and sites of Aboriginal significance as well as Lake Gairdner. In the National Park, the tracks are numerous and marked.  The area is home to huge populations of emu and kangaroo, 140 species of birds, as well as the rare southern hairy-nosed wombat.

At the entry point of the park is the country town called Wudinna with a spectacular rock formation. Pildappa Rock is another amazing rock formation on the outskirts of the Gawler Ranges National Park. You can also head out to the Organ Pipes to witness the curious landscape of ochre-red columns formed by powerful volcanic forces.

The coast lines of Eyre Peninsula are spotted with many small towns – isolated communities that have flourished on exotic seafood – including abalone, oysters, salmon, King George whiting and farmed tuna.  There are also secluded spots where the big fish lurk, the blue swimmer crabs hang out and the precious abalone hides.

Most of the produce is available aplenty in the local restaurants, cafes and fishing outlets you’ll encounter on the Seafood Trail. Some producers also offer tours of their operations. All while chomping down on some of the most prized seafood in the world. 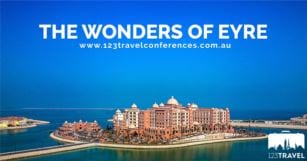