Spectacular and off-beat locations of Australia

As Australia is home to a spectacularly diverse geography which is sparsely populated,  there is no shortage of semi-secret spots to explore. Consequently, some of Australia’s best experiences can be found far from the tourist trail. While most visitors base themselves in the major cities like Sydney or Melbourne, the numerous smaller hubs can be more rewarding. These have fewer tourists and are often in proximity to nature’s plentiful bounty.

The museum-infested Australian capital of Canberra was once considered over the hill but has again fallen into the good books of sophisticated travelers. Launceston in Tasmania feels more like a Victorian-era English town, with stately buildings and charming green spaces. The increasingly popular upmarket dining scene takes considerable advantage of the local produce.

The Blue Mountains region, about an hour’s drive west of Sydney, is host to undulating grassy hillsides, high-altitude eucalyptus forests, and valleys full of rainforest vegetation often within a few miles of each other.

The misty village of Leura lies bang in the center, and unlike the main settlement, Katoomba is seldom frequented by day-trippers. The tiny central street provides numerous points of interest, with several stores that stock locally made organic toiletries; and Josophan’s, a Belgian chocolatier, that commands a devoted following. Exquisite restaurants and intimate cafes, from charming English tea houses to Mediterranean tapas joints, provide succor that’ll suit any mood.

In summer, many of the gardens in Leura’s grand old homes are thrown open to visitors. Some of the best landscapes fall within walking distance of Leura. The region’s iconic sights, including the subterranean Jenolan Caves, with its vast stalactites and stalagmites as well as the majestic Three Sisters rock formation, are easily approachable on wheels.

Margaret River in the region south of Perth retains a tucked-away feel thanks in part to the unpretentious locals. It is host to several world-class wineries, vast cave systems, upscale farmers’ markets and surf beaches.

Tasmania’s capital city Hobart is the second oldest capital in Australia after Sydney. Located at the entrance to the Derwent River, its well-preserved surrounding bushland, the dense forests, brooding highlands, and rich Tasmanian folklore have long attracted conservationists and off-the-grid tourists from the mainland. They are drawn by its seclusion, character, and fiercely proud locals.

Hobart, is a strikingly beautiful outpost that provides easy access to some of Tasmania’s best natural attractions. These include the rugged Mt. Wellington (a hikers paradise) and the diverse Mount Field National Park, where moorland gives way to temperate rain-forest, and walking tracks crisscross the terrain.

The islet of Norfolk Island, once a penal colony retains plenty of landmarks alongside a national park and several pristine beaches. The once self-governing territory is now under mainland control, and witnessing an increase in the number of visitors.

The coastal settlement of Broome may seem little more than a collection of low-slung buildings networked by roads with low traffic, but is surprisingly comfortable, and serves as an ideal gateway to the northwest region of Kimberley.

Related Post: Travel Anywhere in the World for a Grand (or less!) 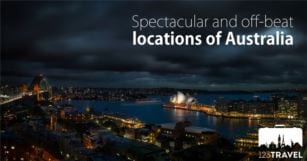