5 American landmarks Your Kids Should Visit Before 15

Though not a definitive list, these 5 American landmarks are a must for anyone, especially those under 15. Not only are these attractions majestic and informative, but they’re also more magical when viewed through the eyes of the young.

When you can learn about Colonial history from an 18th-century ship captain parading around Boston’s waterfront, who needs a textbook? The one and a half hour long “Pirates and Patriots” tour, led by “the captain” in 17th-century naval attire, focuses on the maritime history and introduces the various scrappy, ship-raiding scoundrels that inhabited the city during the Revolutionary era.

And of course Griffin’s Wharf, site of the 1773 Boston Tea Party. Stops along the tour include the Long Wharf, once the longest in the world and the epicenter of Boston’s colonial shipping industry. Some tours are known to hand out vintage goodies, so there’s a good chance that you may walk away with a fistful of pirate money or rusty musket balls.

During the daytime, take a walk along the Skywalk, the U-shaped, glass-bottom observation deck that juts out 70 feet over the canyon’s West Rim 4,000 feet above the Colorado River. The experience is breathtaking, to say the least. At sunset, hit the Grand Canyon Apache Stables, from where you can hitch an hour long ride on horse-drawn wagons that ends up around a campfire.

Nothing is off-limits in the Griffin Discovery Room, which features replicas of the third president Thomas Jefferson’s possessions. Containing items such as his alcove bed to his polygraph machine, it opened on the grounds of the Monticello estate seven years ago. Kids can even try on clothes modeled after his 18th-century wardrobe in his closet.

However old you are, the majestic waterfalls straddling the U.S.-Canada border are worth a visit. The brave can join the Cave of the Winds tour, which will have you change into a complimentary (but essential) yellow poncho and sandals. After descending by an elevator 175 feet into the Niagara Gorge, you’ll plant your feet on the Hurricane Deck, where you’ll be drenched through and through by the spray from the 181-foot Bridal Veil Falls. The tropical-storm-like spray from where the water cascades at a rate of up to 68 mph.

This lush California locale is famous for ancient, sky-high sequoias, but they aren’t the only attraction there’s exotic aquatic life, too. Budding biologists can scramble between the coastal forest’s rocks in a guided tide pool tour while hunting for underwater creatures such as sprawling, green anemones and orange and purple ochre sea stars. Free pool tours are offered at low tides during the summer through Redwood National Park coastline; schedules are available on the website – nps.gov.

This illustrious lineup highlights how our country’s top sights can still latch onto kids’ abbreviated attention spans. Be it gathering around a campfire or playing dress-up on several historical occasions, cool and interactive activities ensure that the younger lot will enjoy these must-see spots as much as their elders do. 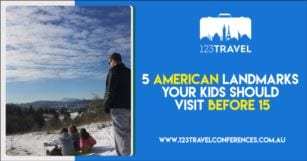